Once Upon a Valentine 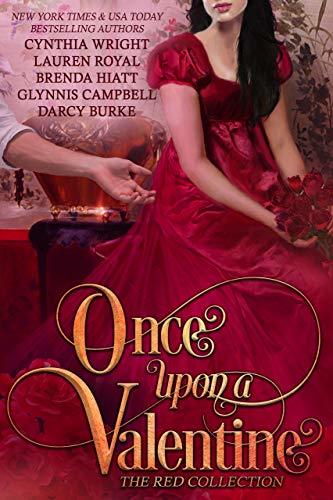 The Jewels of Historical Romance present ONCE UPON A VALENTINE: From the glittering ballrooms of Regency London, to the wilds of Medieval Ireland and Wales, to the dashing patriots of the American Revolution, enjoy thousands of pages of enchanting romance for less than a dollar per novel!

Enjoy more than 2000 pages of delectable romance for a very special price! From the glittering ballrooms of Regency London to the wilds of Medieval England, read five enchanting novels from five bestselling Jewels of Historical Romance!

Also look for Once Upon a Valentine: The Pink Collection!

SMUGGLER’S MOON by Cynthia Wright – England, 1798 – When Julia Faircloth switches places with her shy sister at the altar to save her from the marriage bed of wicked Lord Sebastian Trevarre, she doesn’t dream that they’ll be living on a neglected but enchanting estate in Cornwall or what risks her husband might take to restore his fortune…

VIOLET by Lauren Royal – England, 1673 – Violet Ashcroft isn’t planning to marry—she’d rather spend her time improving her mind than risking her tender heart. That is, until a handsome viscount named Ford Chase moves into the neighborhood…

AZALEA by Brenda Hiatt – England, 1815 – Immediately after an arranged marriage, Azalea’s new husband is lost at sea. On arriving in England six years later, Azalea learns that her husband is alive but has no memory of her or their marriage. Worse, he is betrothed! Can Azalea make him remember the truth before he breaks her heart again?

DANGER’S KISS by Glynnis Campbell – Canterbury, England, 1250 – A beautiful thief can squirm out of trouble with a wink and a smile, until she meets the most feared lawman in the shire, who can’t decide whether to kiss her or kill her.

TO SEDUCE A SCOUNDREL by Darcy Burke – England, 1818 – When debutante Lady Philippa finds herself in a potentially compromising situation, she’s “rescued” by England’s most notorious scoundrel, Lord Ambrose Sevrin. Despite his scandalous past, Ambrose vows to preserve Philippa’s reputation, but instead launches them both on a path to public and personal ruin.